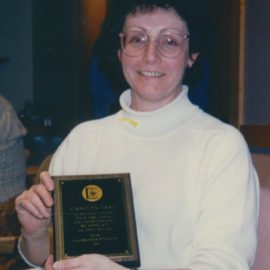 When she was in school, Carolyn Hart Thompson remembers, she saw a boy in the 6th grade sobbing. He had to sit in the back of the class because he could not read. Terribly upset, she remembers thinking that no child should have to be ashamed of what he just can’t do.​ ​

Years later, that same compassion led Carolyn to become a tutor. After several years of tutoring, it became clear that the organization needed paid staff. For the first 15 years, it had survived as a completely volunteer organization. “One day I was at United Way, doing some photo copying, and Irene Gray of their staff told me that we needed a paid person, that we should go for it,” Carolyn says. A few years later, they changed the name of the Coordinator to Executive Director, and so it remains today.

Necessary growth​
Carolyn was a member from 1985 to the mid-1990s, serving as coordinator for most of those years and overseeing substantial growth. In 1985, the number of students had dropped to just below 20. By the time Carolyn left, it had climbed to 140.​

The numbers testify to Carolyn’s work to raise awareness. Among other things, she wrote public service announcements for both radio and television; arranged speakers for local organizations; solicited donated prizes for raffles and celebrity spelling bees; and organized public displays about the importance of literacy. She remembers especially a display that showed what life was like for someone who could not read—detergent bottles with pictures of lemon could be mistaken for lemonade; dog food labels including pictures of meat could be mistaken for food for humans. ​​