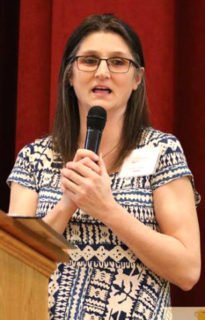 “After you tell somebody for so long that they’re dumb, they believe it.”

Cindy Duell believed that she was dumb. She struggled in school, got no encouragement or help, and was  passed along from grade to grade. She memorized to get by and learned to hate red ink: “You look at your paper, and you got nothing but red, all these red things, that are wrong, wrong, wrong, wrong, wrong.”

In 10th grade, she became pregnant and found that the school no longer had a place for her, so she walked away. A few years later, she managed to earn her high school diploma and found a job as an aide in a nursing facility. But her reading and writing skills were still minimal.

Like others with low literacy, she found ways to hide and manage her difficulties. She faked reading. She swapped jobs with others–she’d do the heavy lifting if they’d do the paperwork. Sometimes she called her husband during her night shift and ask him how to spell words so she could complete the paperwork on a patient.

And she kept her secret. “I never told anyone I could not read, write or spell. It’s been my secret for 51 years. I have never told my sons,” she says. Only her husband, Lee, knew the truth. It was Lee who finally convinced her to get help.

Huge changes
Cindy says her life changed dramatically when she began working with her tutor–who never, ever, uses red ink. “It’s like opening up a Christmas present every day. It’s just awesome.” She filled out the paperwork to buy a car by herself. She’s an avid reader and has an endless list of “wish books” she wants to read. And she’ll talk to anyone who will listen about the importance of literacy.

A media star
Cindy told her story to a rapt audience at the 2019 Literacy Tea.

She was featured in a National Public Radio story about adult literacy heard nationwide. For audio and text, go to https://www.npr.org/templates/transcript/transcript.php?storyId=602797769