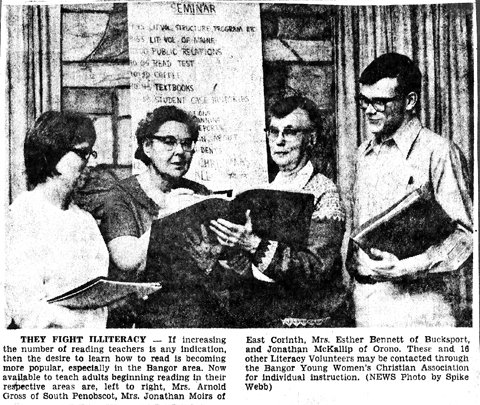 Tutor training was held in various venues donated by organizations, including the YWCA, the Bangor Public Library, and, later, the Bangor Daily News.

At first, the focus was on basic literacy. Before long, as immigrants’ needs became clear, a strand for English Language Learning was developed. Then, as now, tutoring methods focused on students’ needs. Students were encouraged to read and write about what they knew.

A memorable voice​
For many years, training materials were on tapes that were rented from the national office in Syracuse and returned at the end of the training.

In the early 1980s, volunteer Charlotte England went to a regional conference in Portsmouth, NH.​​

“I was passing a room and I heard a voice that was so familiar,” from the training tapes, she said. She assumed someone was playing a tape. But “it was Ruth Colvin. She was the guest speaker. It was thrilling to meet her,” Charlotte says. Later, Ruth wrote the tutor handbook that is now in its 8th edition and is used across the country, including in Bangor. Jonathan McKallip, one of the first tutors, soon became director of the statewide organization.​ Later he moved to the national office as a Vice-President. He was always proud of his Bangor roots.