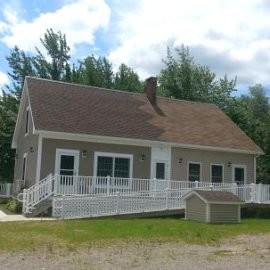 By 2015, we had already updated our logo to celebrate our vision of a bright future.

Now we moved into a new office on the Eastern Maine Community College campus. It was both a practical and a symbolic move.

We began in 1969 with no office. Later, the Bangor Public Library provided an office; volunteers remember that it was a small room in the basement, next to the bathrooms. But they were happy to have it. In the 1980s, there was an office on State Street, chosen because it was unobtrusive and would help protect student privacy.

By the early 2000s, we had migrated to a tiny space at Park Woods. United Technologies Center then gave us an office in its library, and we operated there for 10 years.

In 2015, EMCC gave us our fine new home at minimal cost; they have supported our activities in many other ways. The new space allows us room for expanded staff and programming. It provides easy access for students, especially those who use public transportation.