Our founders, Sister and Agnes 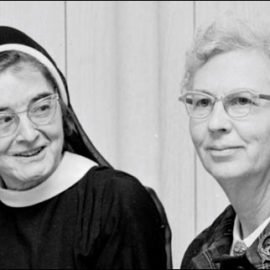 Agnes Beckwith was a 72-year old Baptist from Lamoine. Sister Mary Benigna was a 63-year old Roman Catholic nun. They were both retired teachers who believed in helping people, and they made Literacy Volunteers happen in Maine. The national Church Women United had taken on adult literacy as a cause. The Bangor CWU group tagged Sister and Agnes to bring Ruth Colvin’s Literacy Volunteers of America program to Maine.

She was certainly the only one at the workshop in Syracuse wearing a habit. ​

Agnes had little experience with nuns, but soon found much in common with Sister. And after a few months, she was telling others that she’d slept in a convent and made new friends.

Over the summer, Agnes put 2500 miles on her car (Sister didn’t drive). The two spoke at church groups statewide, urging people to volunteer.​

The two were passionate about their cause. Paula Adelman, the first president, recalls that the officers were simply ”volunteered.” ​“Sister said to different women, ‘You’d be a good secretary,’ ‘You’d be a good treasurer.’ When she got to me, she said, ‘You’d be a good president.’ Maybe because I was kind of a loudmouth.”​ (Read Paula’s story on this timeline: http://lvbangor50.org/timeline/paula-adelman/)

It was a statewide organization with no paid staff. Richard Moran at the state adult education office provided moral support and enough money for a  small state office.

Pure grassroots
This was definitely a grassroots organization.​ A handful of women (and one man) put the program together, met in their homes, held bake sales, eventually managed a tiny office next to the basement bathrooms in the Bangor Public Library, and served students well.​

Amazingly, it continued to work. It wasn’t until some 15 years later that Literacy Volunteers finally had one paid employee.

By 1979, the two were delighted to celebrate the organization’s tenth anniversary.