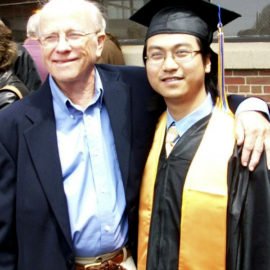 “If they made me pay to do tutoring,” says tutor Phil Locke, “I would pay—gladly.”​​

Phil really means that; he puts in as many as 300 hours a year. Now in his 14th year, he began tutoring after he retired from teaching math at the University of Maine. He has a lifelong interest in language, especially poetry, and was committed to giving back to the community. Tutoring was a perfect fit.​​

He tutors wherever is convenient for his students, including a dairy farm in Kenduskeag where several of his students worked. He typically works with several English language students at a time.​​

Phil keeps computer records of all of his meetings with his students. His file for just one of his current students is 66 pages long. He has collections of exercise books, novels, and short stories that he draws on for tutoring sessions. When he realized that many of his students had Spanish as a first language, he taught himself Spanish and now works with students in both languages. Hoang Lam
One of Phil’s most notable students was a young man from Viet Nam, Hoang Lam. With Phil’s help, he earned a degree in Electrical and Automation Technology from EMMC and then a bachelor’s degree in engineering from the University of Maine. He is now a naturalized citizen and working as an engineer in Maine. He calls Phil one of his best English teachers and stops by to see him whenever he is in Bangor.​​

2011 was a great year for Phil and Hoang. Phil won the Coombs Award, one of Channel 2’s “2 Those Who Care” Awards, for his work with literacy. Hoang gave the major address at our awards night ceremony.