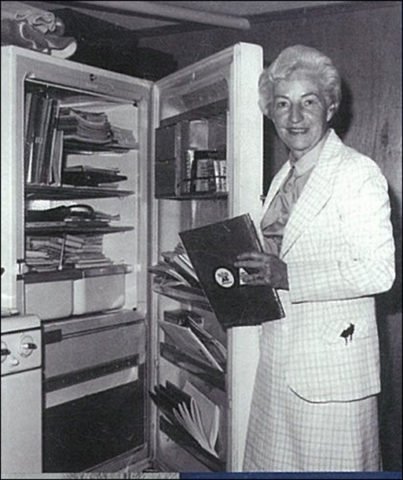 Ruth Colvin knew from the 1960 census that low literacy was a problem in New York state. She researched the issue and began working with faculty at Syracuse University to develop learning materials for adults. She was influenced by Frank Laubach’s “Each One Teach One” program.

She started America’s first adult literacy program, calling it Literacy Volunteers of America. The first volunteers met in Ruth’s basement, where a converted refrigerator became their bookshelf. The program soon expanded to other cities in New York state.​

​In the late 1960s, the national organization Church Women United took on adult literacy as a cause and encouraged local chapters to act. The Bangor CWU chapter, headed by Hazel Lobley, recruited Agnes Beckwith and Sister Mary Benigna to be trained as tutors and then to train others.

Teacher and author​
Ruth Colvin taped the early training materials and later wrote textbooks; her handbook for tutors is in its eighth edition and still in use. She helped  create literacy programs in Zambia and Swaziland.​

​In 2002, Literacy Volunteers of America merged with Laubach Literacy International to create ProLiteracy Worldwide. Today it is the largest non-governmental literacy organization in the world, with 330 affiliates in the U.S. alone.

An amazing woman​
In 2006, Ruth Colvin was given the highest honor a U.S. citizen can receive, the Presidential Medal of Freedom.​​

In December 16, 2018, Ruth turned 102. She is still involved in literacy work. Recently she recorded a 50th anniversary message for Literacy Volunteers of Bangor. Watch it here.