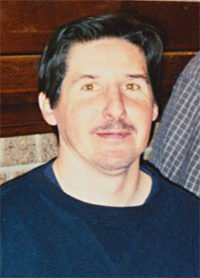 If you’re driving around the Greater Bangor area, you may see a car with a sign on the door: “Ask me about Literacy Volunteers.” Steve Scalese is our informal ambassador-at-large and a testament to our mission: improving lives one at a time. He began as a student 16 years ago and has been involved ever since​.

Steve was one of Mary Marin Lyon’s first recruits when she became Executive Director. The two hit it off and she was able to place him with a tutor: “She was crucial in matching me up with the right person,” says Steve. He says he was at a 5th grade reading level when he and his tutor began reading books together.​​

His continued hard work and increasing skill enabled huge accomplishments. One of the biggest was completing the paperwork to buy a house. “We bought the house in 2010. The closing was the day before Thanksgiving. We cooked the turkey at the trailer as we were moving into the house,” Steve laughs, beaming with pride.

Rising up​​
His employment situation has steadily improved, from working several dead-end jobs to make ends meet to steady work, but without health insurance. This year he moved to a much better full-time job with complete benefits. ​ ​

Steve wanted to set a good example for his children. He stresses the importance of reading and education: “I want them to say, ‘If he can do it, why can’t I?’” He takes pride in being able to help his children with homework. ​ Giving back​​
Steve serves on our board. Over the years, he has given talks and been featured in our appeals and advertising. “There’s a need for it,” he says. “Some people go through the program and don’t give back; that’s not what I want to do.”​​

Steve is certainly a success story. His advice for anyone who might be reluctant to reach out for help: “There’s nothing to be shy about. It’s not a group setting, it’s one-on-one learning.”